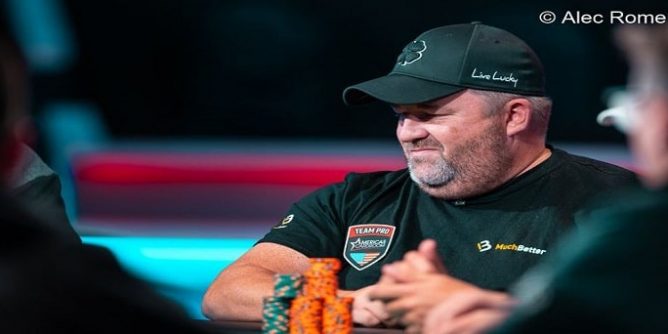 Chris Moneymaker, who launched a worldwide poker boom by qualifying for the 2003 WSOP main event through an $86 online satellite and turning it into $2,500,000, is leading the Americas Cardroom pro team to the 2022 WSOP.

There is one more chance on May 22nd, and qualifiers run daily!https://t.co/kC08ZgxVnM pic.twitter.com/SC7zCn9Afk

😎K.L Cleeton is heading back to the #WSOP Main Event for the 2nd year in a row, courtesy of #ACR, but this time one lucky player will join him. Want to win?
👉Start by entering one of our 6 #WSOPRookieChallenge tournament satellites NOW

In case you need to brush up on your poker history, Moneymaker conquered the 2003 WSOP Main Event to win $2.5 million in prize money. While that’s exciting enough, his win came after he secured his Main Event seat through a series of online satellites, making him a true online poker pioneer.

Chris Moneymaker was responsible for igniting the poker boom also known as “The Moneymaker effect” in 2003.

Chris Moneymaker is the starter of the poker boom

Chris’s win not only made him a millionaire, but it ultimately inspired millions of people to flock online in the hopes of becoming the next Moneymaker.

That’s why you’ll often hear the term “Moneymaker Effect” to describe the boom that followed his 2003 win. The fact that money is literally part of his name certainly didn’t hurt.

Moneymaker’s story and influence didn’t end in 2003. He’s been an incredible ambassador for the game of poker and spent the last 17 years representing Poker Stars. He’s also racked up $3,900,000 in live winnings and earned his place in the prestigious Poker Hall of Fame.