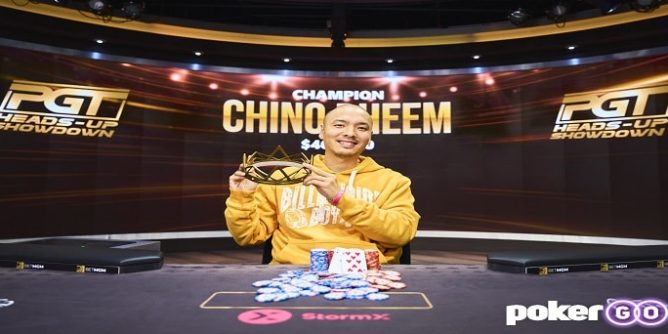 Chino Rheem wins the first-ever $25,000 PGT Heads-Up Showdown 2022, taking home the $400,000 top prize after defeating Darren Elias in the final duel on Saturday at the PokerGO Studio in Las Vegas.

On his way to facing Darren Elias in the final, Rheem defeated Nick Schulman in the first round, Jeremy Ausmus in the second round, Bill Klein in the quarterfinals, and Isaac Kempton in the semifinals.

Elias had gone through Landon Tice, Erik Seidel, Daniel Negreanu, and Justin Young. That left Rheem, a three-time World Poker Tour champion, up against Elias, a four-time WPT champion, for the championship title in the first-ever PGT Heads-Up Showdown. Each player was guaranteed $200,000 and playing for an additional $200,000 in prize money. The final match took about an hour and 40 minutes before Rheem finally took the crown.

“I’m feeling good. It’s a really good feeling. Honestly, it’s just a privilege and an honor to play in these events, especially given where I was at less than a year ago. I’m really grateful. It just feels good to be able to come and play and actually win.”

“At one point in my life, I was in a really dark place”

After his victory, Chino Rheem opened up about the journey he’s been on for the past year or so of his life, mentioning that he’s now playing sober for the first time in his career.

“It’s no secret in the poker world that I’ve had my ups and downs. At one point in my life, I was in a really dark place. I’m just really, really grateful to have been shown the light and find god and the people that he’s put in my life to help me sustain a much more healthy, sober life. I owe it all to that, really.”