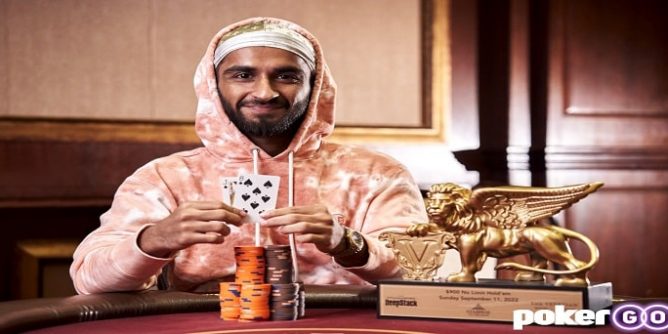 Francis Anderson, John Yelaney and Arsh Grover win the first three Stairway to Millions events. In total there are a staggering $2,150,000 in guaranteed prize pools up for grabs!

On Friday, Francis Anderson became the first winner from the second edition of the Stairway To Millions, winning Event #1 at The Venetian® Resort Las Vegas. Anderson topped a field of 93 entries to take home the $6,702 first-place prize.

In addition to the lion’s share of the Event #1 prize pool, Anderson won a $1,640 ticket to compete in Event #5 or Event #6 of the Stairway To Millions.

Anderson entered Day 2 of the event with the chip lead. Six players remained, including Wu Zhou, who made it to heads-up play against Anderson. Anderson had a sizeable chip lead to begin the final duel, but that didn’t stop Zhou from doubling up early and then working his way into the lead. Anderson would take back the lead before sealing victory with pocket tens. Zhou had moved all in with nine-eight and Anderson made the call. The tens held for Anderson, crowning him Event #1 champion.

In heads-up play, Yelaney was faced with going against Event #1 champion Francis Anderson. The duel swung back and forth, but ultimately Yelaney was able to deny Anderson back-to-back titles and get the win. According to TheHendonMob.com, the victory was the first live tournament win of Yelaney’s career.

In addition to the first-place prize, Yelaney won a $1,640 ticket to compete in Event #5 or Event #6 of the Stairway To Millions.

Grover topped a field of 82 entries to get the win. He defeated Wu Zhou in heads-up play, with Zhou earning his second runner-up finish of the series.

In addition to the first-place prize, Grover won a $2,740 ticket to compete in Event #7 of the Stairway To Millions.